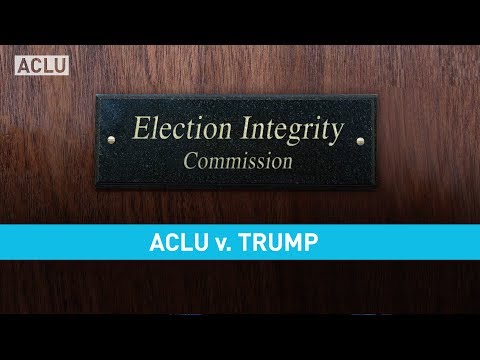 By Jane Henegar, Executive Director of the ACLU of Indiana

There is a threat to electoral integrity in Indiana and across the nation. It isn't hidden within voter data. It is right out in the open; it is the number of votes cast in our elections. The U.S. voter turnout is extremely low compared to other countries. We ranked 31st among the 35 countries according to the Organization for Economic Cooperation and Development, and Indiana had the worst voter turnout in the nation in 2014.

Because of voter access and turnout problems, too many eligible voters do not vote in Indiana and across the country. But, instead of focusing on making sure America's elections are safe, fair, and transparent, we are seeing a coordinated attack on voting rights in our nation.

Most recently, the demand for voter information from the "Election Integrity" Commission, chaired by Vice President Mike Pence, raises substantial privacy concerns. Many states have refused to share data and risk the security of voter's personal information.

Here in Indiana, the Secretary of State's office complied with a limited amount of the voter data demanded by Kris Kobach, vice chair of the Commission. Under Indiana law a voter's name, address and congressional district are available to the public. Otherwise, voter information is kept private.

The voter suppression commission, as we should more aptly call it, requested full names of all registrants, addresses and dates of birth, last four digits of social security numbers, political party and voter history. Kobach has promised that "any documents that are submitted to the full Commission will also be made available to the public." There is no guarantee that the information will be kept anonymous and secure. For the ACLU of Indiana, the lack of clarity and potential misuse of this data raises substantial constitutional concerns.

This Commission's creation and its overreach for information are indicative of something larger. At the same time that the "Election Integrity" Commission sent out their request, the Department of Justice informed all 50 states that they "are reviewing voter registration list maintenance procedures in each state covered by the NVRA [National Voter Registration Act]" and asking how states plan to remove voters from the rolls. The ACLU sees this as a sign that the Department of Justice may sue states in the hopes of forcing them to remove voters from the rolls, endangering the rights of many.

The "Election Integrity" Commission has violated federal requirements and impeded constitutional rights. We will hold it accountable. It's our elected officials' responsibility to preserve and advance the right to vote, not to hinder and impair.

The right to vote is essential to a vibrant democracy. The ACLU of Indiana will continue to protect our democracy and support our constitutional right to have our voices heard.

Read the national ACLU press release on the case.

Take action against this attack on voter's rights.

To Unrig the Maps, Indiana Needs Real Redistricting Reform, not...

Statement on the "Election Integrity" Commission Request for...