The American Civil Liberties Union of Indiana filed a lawsuit today challenging House Enrolled Act 1041, which bans transgender girls from participating in school sports. The Indiana legislature overrode Governor Holcomb’s veto of HEA 1041 today, despite the fact that similar laws have already been blocked or temporarily enjoined in other states.

The lawsuit was filed on behalf of A.M., a 10 -year-old girl who plays on her school’s all-girls softball team. The new law, which would go into effect July 1, 2022, would deny A.M. the right to rejoin her team because she is a transgender girl.

According to the complaint, playing softball has helped A.M. to more fully experience her life as a girl. Not allowing her to do so in the fall would be a painful, constant reminder that she is not accepted by the world as the girl that she is.

“A.M. knows who she is better than anyone else, myself included. Despite that, she has had trouble in the past with self-confidence. When she joined the softball team last fall, it helped her come out of her shell. I watched as she bloomed and felt more at ease in her skin,” said A.M.’s mother. “When my daughter learned about this law, she was hurt and angry. She wants to stand up for girls like her, as well as herself, because she knows how upset they are right now. She wanted me to share that ‘We can’t expect kids to say the Pledge of Allegiance and Liberty and Justice for All while not giving liberty and justice to all.’”

The lawsuit, filed in the U.S. District Court for the Southern District of Indiana, asserts that preventing A.M. and other transgender girls from participating in girls’ athletics is discrimination on the basis of sex in violation of Title IX, and also represents discrimination on the basis of transgender status, as well as sex, in violation of the Equal Protection Clause of the United States Constitution.

“When misinformation about biology and gender is used to bar transgender girls from school sports it amounts to the same form of sex discrimination that has long been prohibited under Title IX, a law that protects all students – including trans people – on the basis of sex and it denies the promise of the Constitution of equal protection under the law,” said Ken Falk, legal director at the ACLU of Indiana. “Girls like A.M. simply want to access the same opportunities as their peers and denying them that right jeopardizes their mental health and physical well-being.” 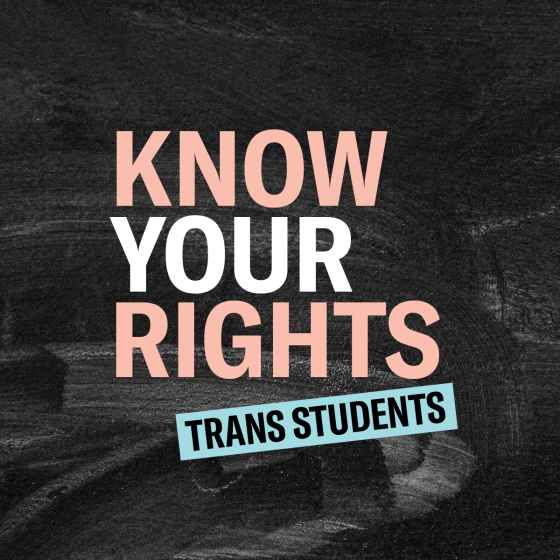