Finding Hope in a Vision That Moves Us Toward Justice 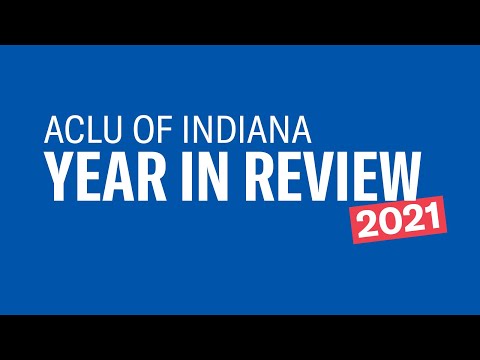 Our country continues to grapple with a long history of racism and police violence, with a global pandemic, and with too many of our fellow Americans picking up the mantle of an administration that spent four years attempting to strip individuals of their civil liberties, of their votes, and of their dignity. If we are paying attention, we are weary. Our country is divided.

As bell hooks and others remind us, hope is necessarily built upon a vision for tomorrow. And, for more than 100 years, the ACLU has pursued a vision for tomorrow in which fairness, freedom, and equality is a reality for every one of us. We have followed an unerring path toward justice. We have fought alongside Americans – alongside people such as you – to ensure rights are protected and a brighter future for all remains America’s promise and purpose. We fought for that future in 2021 and we will not back down now.

Achievements behind us and challenges ahead of us

As we reflect on our victories here in Indiana in 2021, we must also be clear-eyed about what may lie ahead. With progress comes pushback. We will need Hoosiers to remain vigilant and to stand together.

In 2021, we fought to ensure an equitable learning environment for students, to stop racist bullying and discrimination in Indiana schools and to protect the rights of LGBTQ Students. We will continue to challenge public schools that fail to provide equal rights to transgender students in 2022, and we will remain vigilant, as some Indiana legislators – relying on misinformation and following the sad example of other states – may attempt to pass classroom censorship legislation in the 2022 General Assembly.

During the 2021 session, we stopped several voter restrictions bills in the statehouse and we helped block an illegal voter purge law in the courts. By misleading voters about election accuracy and voter fraud, some self-interested legislators are sure to continue chipping away at Hoosiers’ access to the ballot. The ACLU will fight barriers to the ballot, here in Indiana and across the nation.

We continue to fight in the courts and in the Statehouse to protect access to abortion in Indiana. If the U.S. Supreme Court were to uphold Mississippi’s ban in 2022, the decision would cut into the core of Roe v. Wade’s holding and our right to make fundamental decisions about our health, our lives, and our futures. Contrary to the will of a majority of Hoosiers, Indiana legislators are poised to ban abortion entirely if the Court overturns Roe. But we know Hoosiers are prepared to fight alongside us, as the ACLU continues our work to protect abortion access using every tool in our toolbox.

In 2021, we combatted over-policing in communities of color, demanding a reduction in the role, resources, and power of police. But officials in Indiana continue to throw resources at police departments to address spikes in crime, despite what the data tell us – more police officers will not result in a long-term reduction in crime. To achieve public safety for all, we need to permanently increase resources for the kind of community-based efforts that do reduce crime: Education, Jobs, and Mental Health and Addiction Services.

Our vision for the future gives us hope.  The battles ahead will not be easy, but just as we have persisted and overcome for the last 100 years we will continue to do so now.  The ACLU of Indiana, and all who stand with us, will continue on the path toward justice.  We will not stop, we will not lose hope, and, we know, neither will you.